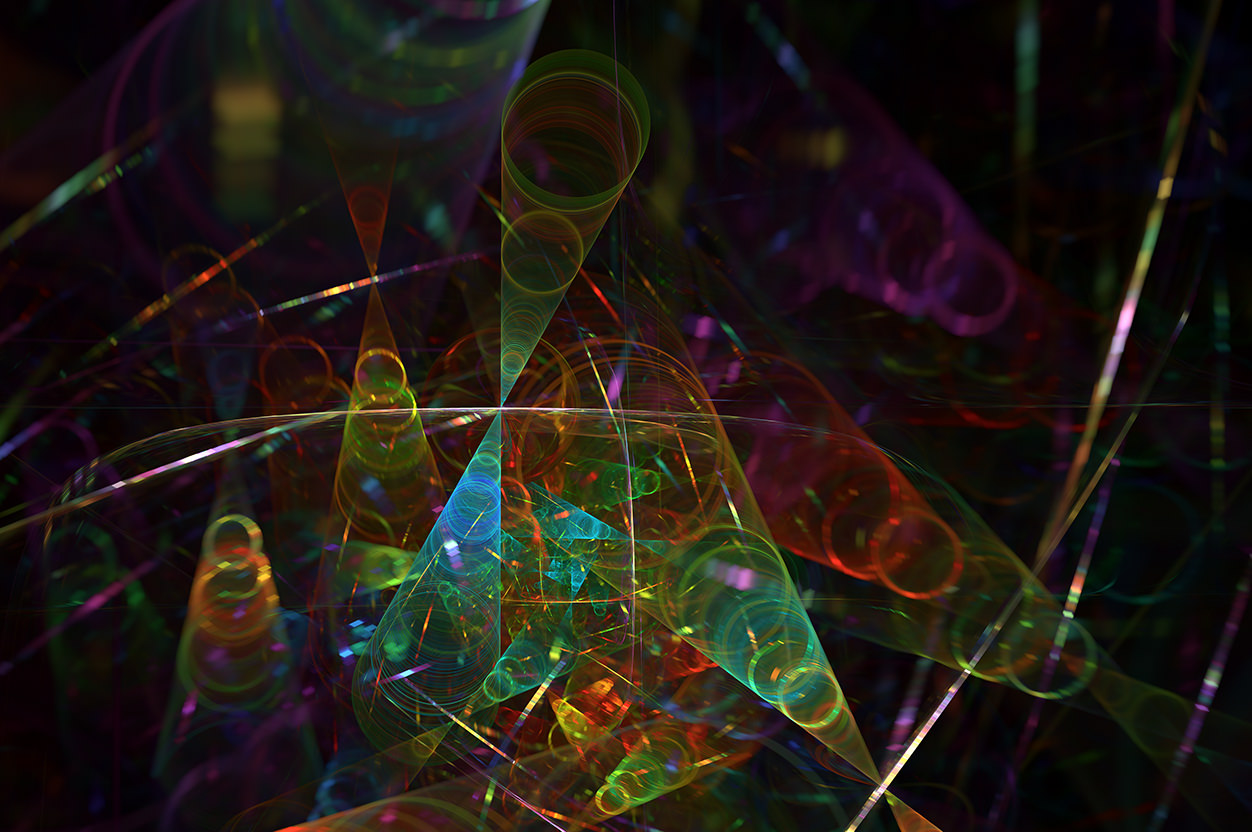 This publication marries science fiction stories with non-fiction essays and with video interventions regarding developments in digital art, computer, communication and network technologies.

It is admittedly a grab bag of texts and videos, yet it is also, and principally, an attempt to come to philosophical terms with the so-quickly evolving sphere that is technological culture.

Science fiction is an unbounded form, a necessary delicacy that cracks the skull of the mundane to expose the psychedelic nest of the collective mind and of our vibratory realities.

The curious texts presented in this collection are a curatorial Aleph, a visionary point of radiance exposing the determinations of a today that invariably feels like a tomorrow.

The first reflection is a most-elegant and most-congruous short story by Hugo Award-winning author Ken Liu. Alter is a tantalizing spiral that seamlessly bridges a coded eschatology with the sensory piercing of the uncanny valley — a kind of passage into a cosmopsychism — or perhaps it can be interpreted as a reference of the final anthropic principle? This is followed by The Western Project, a series of video interviews by Dinka Pignon with Canadian cyberpunk veteran and artist Derek Robinson. Derek, a self-educated philosopher, is a delightful conversationalist whose humility and humour is exceeded only by his erudition.

Digital technologies currently in the pipeline and in their nascent phases will, in the next five to 35 years and beyond, radically alter the art and cultural world. The increasing rapidity of the future, and the pressures on the planet and ourselves, demand radical measures and radical translations.

A plenitude of assertions does not, of course, make anything just so, but ratcheted by our integrated media reality they do propose coordinates in a system of hard and soft possibilities. A coding of hope in a war against our ignorance and self-worship.[1]

The essay by Ian Angus, Emergent Meaning in the Information Age, is a critical starting point for a working analysis of the deficiencies of mathematical reasoning, suggesting that “… digitization does indeed provoke a crisis of culture: without delay and silence, culture approximates a pure transparency; even though information contains the possibility of emergent meaning, such meaning does not emerge directly or automatically from the accumulation of information. The danger of pure transparency is lack of meaning or value.“

Until we latch onto a much more sustainable way of being in the world — developing a devotion to empathetic service to the world, rather than desiring solitary rewards that emphasize our individuality — we won't have a chance of solving the drastic issues that are our today.

A House Made of Dawn is to encourage far-horizon thinking and weigh in on the fast-approaching future. It invites an openness to transcendental transpositions that are key to the tsunami of cultural change which the new aesthetics discovered in technological possibilities will provide.

Amy Alexander’s live Twitch feed, which scrapes the barrage of the global not-seen-but-nonetheless-world-broadcasted, is television of the world framed with an intensity that can’t help but be disconcerting, yet peculiarly ultra-democratic.

Thomas Dreher has allowed us to include his essential reading of the historical record of the beginnings of computer art, while preeminent media theorist Lev Manovich, Presidential Professor at the Graduate Center, City University of New York, sits down with me from Kyiv to be interviewed for a wide-ranging talk about his latest interests and the benefits and arduousness of analytics in the era of big data.

A fascinating and highly informative interview with robotic engineer and painter Joanne Hastie on machine learning and how an artist deals with the massive amount of generative imagery created by machine learning. She also talks about her robot paintings; that is, her paintings actually painted by her robots.

Keiko Honda’s personal essay, A Body of Knowledge: Lessons from My Grandfather quite literally and poetically embodies the best that our communication technologies empower — a sharing in the presence of the awe and wonder of the world. It reminds me of the celebrated text of science fiction master Stanislaw Lem writing of his childhood home.

Zainub Verjee allows us a look through a much-needed wide angle lens on the politics of digital culture worldwide. Though brief, it strikes hard and is a veritable alarm to consciousness (in this era of Brexit and other contractions that are nationalism) to situate the arts, science and technology collaborations and their histories firmly within the study of International Relations.

I understand, or place, Naranjan Rajah’s analysis Towards a Post-Traditional Gnoseology of Potentiality and Prediction: Preliminaries as an explosion of what AI is about through his profound explication on probability. He’ll likely be hired one day to oversee the design of Gibson’s Aleph biochip.

The Helena Situation is a dizzying read into the reality of how the fiction of social media manifests our identity, makes our brand. A looking-glass that is a hyper-ideological intoxicant, and the nausea and jail that each and every posting postulates without our knowledge, heedless of our consent.

A relief is measured out with the fine-drumming mythological Horse by Archer Pechawis. He lets us know that our addiction to our own devices, our own machinery comes at a ridiculous price. We cannot propose that our technology is sufficiently advanced if it continues to destroy the environment that all depend upon. We are losing our key relations, our companions in life, the animal world, and a pocket full of digits is no substitute for the scales of the ocean, the four-leggeds, and the feathers of the sky.

There are some incredible blind spots of course — I am especially shamed that there is no essay dealing specifically with what AI has brought to the making of music[2]. I comfort myself with the thought that music is founded on the mystery that is listening, the empty ear.

I’ve compensated for various lapses by the inclusion of a resource list of curated links. Back in the day, many prominent sites were essentially indexes, and I am, yeah, old enough to remember Yahoo’s Subject Directory, the OpenDirectory, and our very own pioneering Vancouver creation that, 27 years ago, created ANIMA (Art Network for Integrated Media Applications).

Will the sublime horizon of digital arts be the concluding formation of our information civilization?

Surely it’s a damn good question, and that itself is more than half the answer.